: The Danger of Water Hammer

Who's Knocking? The Dangers of Water Hammer

How to mitigate water hammer?

The phenomenon of water hammer may sound familiar from domestic plumbing. It is the knocking sound that occurs in a pipe when a faucet is turned off abruptly. But in finely tuned liquid sampling systems, the effects are more severe. A sudden pressure spike — strong enough to damage or destroy numerous pressure gauges, flowmeters, pumps, and other sensitive, critical components — can pulse through the system without obvious warning. If the pulse is powerful enough, it can even burst lines or end connections, which could be dangerous if the system contains toxic and/or high-temperature fluids.

Water hammer can be puzzling, disruptive, and damaging for any operator. It occurs when a valve suddenly closes, and liquid flow is stopped. In typical sampling systems, the root of the issue can often be overlooked or misdiagnosed. The system’s maximum process pressure will not exceed its design, so where does the extra pressure come from?

Fortunately, an operator can identify, estimate, and minimize water hammer if he or she knows what to look for, and the right steps to take toward mitigation. Let us take a closer look at what is happening inside a sampling system when water hammer occurs.

Understanding Water Hammer: Cause and Effect

When a valve closes and interrupts liquid flow, something must absorb that liquid’s momentum to bring it to a standstill. Because the liquid is heavy and moving quickly, the force required to decelerate the liquid creates a pressure surge. The surge originates in the compression of the liquid and from deformation of the tube walls; the resulting pressure wave then travels upstream in the tube.

This surge happens quickly — usually too quickly for a typical proportional relief valve to perform its intended function. The rapid pressure spike may cause the relief valve’s rupture disc to burst as intended, but this will occur too late to alleviate significant damage to an upstream sensor or flowmeter. These components will have already received the full force of the pressure spike before the relief valve opens.

Clear and Present Danger: How to Mitigate the Risk

The first step in solving water hammer issues is estimating the impact that pressure spikes are having on a system. Determine this by using a relatively simple calculation known as the Joukowsky equation. Using the sample fluid’s density (ρ), the equation estimates the magnitude of a water hammer related pressure pulse (ΔP) that occurs when liquid velocity (u) suddenly changes by Δu as follows:

In the above example, the result is 14 bar of additional pressure in the sampling system that the operator has most likely not planned for and may not be tolerated by the system. If the system flows at a higher velocity than 1 m/s, the pressure spike would be even higher.

The Joukowsky equation provides a theoretical pulse pressure, but under real conditions, the pulse may not be quite so high. The full force of the pulse develops only when the change in velocity is sudden, specifically when Δu occurs within a given time period (t). Next, fine tune the calculation to account for these conditions with the following equation (in which L is the length of the liquid line):

If the water line in the example above is 100 m long, then:

In this example, t represents the time it takes for a pressure wave to spread upstream and reflect back to the valve. The full pressure pulse only occurs when the reflected pressure wave returns to find a closed valve. The above result, then, indicates the pulse will be less than the calculated pressure if the valve takes longer than 142 ms to shut off. In other words, the water hammer pulse can be minimized by closing the valve over a longer period of time than 142 ms.

In domestic plumbing systems, water hammer can be solved by installing vertical pipes containing trapped air near each faucet, therefore eliminating the unpleasant knocking sound. This design could theoretically work in liquid sampling systems, but it would unfortunately create a dead leg that could lead to unacceptable sample contamination. Thus, a different approach is required – one that manages flow to mitigate water hammer.

One option to better manage flow is to use multiturn needle valves with tight shutoff seats to slowly shut off flow rather than ball valves, which stop flow instantaneously. Ball valves cannot be closed slowly (or throttled) without causing damage to the valve. The sudden flow stoppage from a ball valve can potentially cause major pressure surges in sensitive sample conditioning and transport systems and lead to damage. A system featuring multiturn needle valves

allows operators to stop flow more slowly, effectively dissipating the liquid’s momentum over a longer time period to minimize water hammer pulses. It is important to note, however, that needle valves will cause more pressure drop than ball valves, so operators should make sure supply pressure to the system is adequate if needle valves are used. 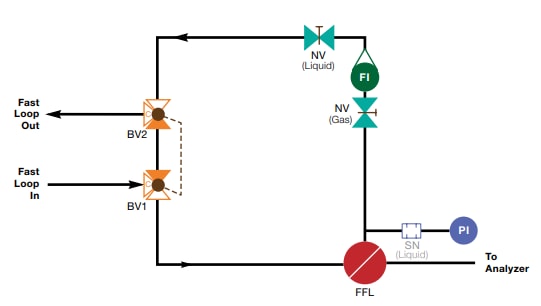 Management the Flow in Fluid Systems

A second flow management method is to simply divert liquid flow in the system instead of stopping it. In a figure shows a fast-loop system with a common handle that controls two bypass valves, ensuring that each valve can’t be moved independently. A three-way ball valve with specialized porting can be used, opening a bypass flow path before the main path closes. In such a system, the valves are never off, effectively eliminating the potential for water hammer to occur.

Is Your System Up-to-Date? The Water Hammer Checklist

Water hammer can cause issues in any liquid sampling system, including maintenance headaches, downtime, and potentially dangerous situations.

When designing a system, keep these basic tips in mind to protect it against the effects of water hammer issues: